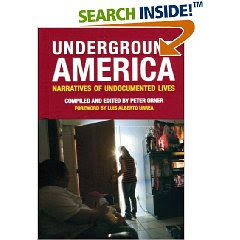 Underground America: Narratives of Undocumented Lives. Compiled and Edited by Peter Orner. Twelve million to 15 million undocumented workers call the United States home, a mere number until one hears their stories.Take Diana, a 44-year-old from Peru who worked graveyard shifts cleaning casinos until Katrina washed them away. After the storm, she spent 15-hour days helping rebuild Biloxi, Miss. — grisly work, dangerous and harmful to her health, but she needed the money.

A year later it dried up, though, and Diana’s reward for this service? She was picked up by immigration officials, refused a lawyer and shoved into a series of prisons, punished for having asked for an attorney every step of the way.

“But we’re here in this country where human rights are respected,” she protested to another woman, in a cell not fit for livestock. “Who told you that?” the other woman replied. “Those are just stories.”

“Underground America: Narratives of Undocumented Lives” is part of a series of oral history projects Dave Eggers started under his McSweeney’s publishing company, which includes books in the voices of exonerated prisoners and Katrina survivors. Like Mark Twain, that other great self-publishing American novelist, Eggers is dedicated to capturing the sound of America dreaming.

But the America of this book is very different from the comfortable place many of us occupy. It’s a nation where an undocumented worker gets paid less than minimum wage to, say, whitewash a fence, and then gets sent home as a criminal when done. His crime, if his illegal entry is ignored, is simply dreaming of a better life.

Believing in this dream life also makes many undocumented workers a target. Mr. Lai, a 40-year-old cook from China, did believe and paid dearly. He gave smugglers $30,000 to get him into the United States. He arrived after a yearlong journey only to be told he owed $60,000. All his wages go to paying the interest, and any chance his family will follow is gone.

Another man brought his family up from Mexico and works at meatpacking plants where most of his salary goes to buying supplies.

“The checks I received were supposedly for about $300,” he says. “I ended up with something around $150 after they charged me for the equipment.”

The editors have chosen these tales carefully, with an eye for human rights violations and abuse. But they also have found some inspiring stories. One undocumented Mexican woman is a college student and an activist for migrant workers in North Carolina. A cook develops a cancer and restaurant patrons pay for his treatment.

Time and again, though, hard work is punished because of the accident of one’s birth. A middle-age Pakistani man with diabetes living in Medford, N.Y., returned from work one day at 9 p.m. to be greeted by 10 immigration and FBI agents. “Do you know Osama bin Laden?” they ask him before deporting him.

Another man left Iran in search of work decades ago and built a business fortune in the United States, employing at one point 25 Americans. After 9/11, he had to register with the Department of Homeland Security and was threatened with deportation.

“I believe they would take my life in Iran,” he says on the eve of his hearing. “I cannot take that risk.”

John Freeman’s work has appeared in the Guardian and NPR.org. He lives in Manhattan.

The third book in the Voice of Witness series, compiled and edited by acclaimed writer Peter Orner.