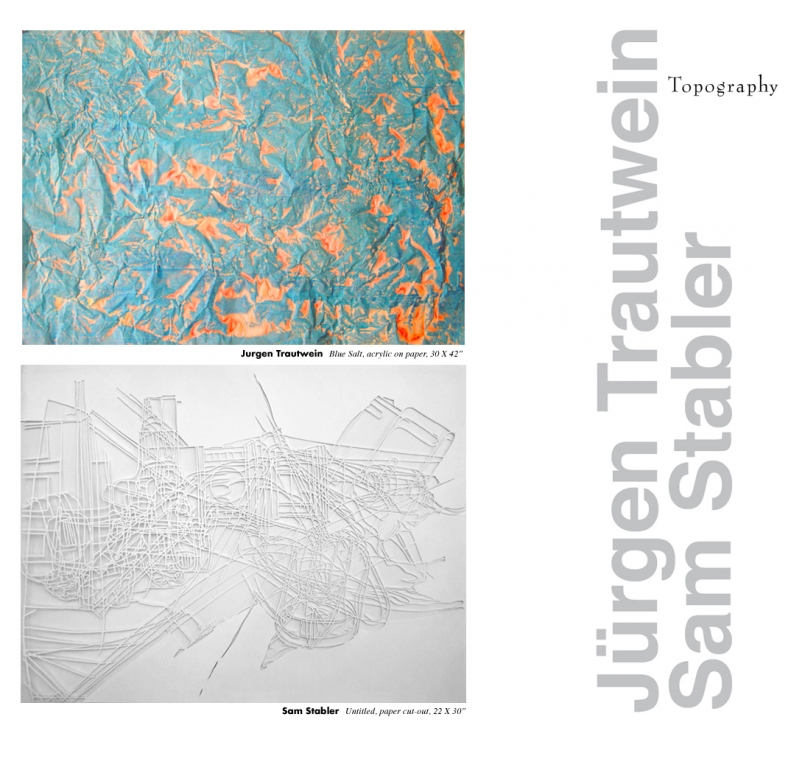 
German artist Jürgen Trautwein’s new series “Silent Topography” presents works on paper with surfaces that mimic the way the eye captures zoomed in patterns in nature and conversely, a perspective where the vantage point is from zooming out, as in aerial photos and topography maps.

Where Trautwein’s work might recall certain abstract field paintings of the 60’s with densely textured surfaces that build a heavy object in physical form and emotion, his process results in pictures that are light, not labored. He layers paint on found papers, (some being old airport blueprints,) crumples the paper, which reveals random intricate lines and colored shapes and tones. The chaotic but meditative result suggests culture’s dual character of delivering tragedy one minute, serenity the next. His methods illustrate 21rst century changes in the process of painting.

New York artist Sam Stabler presents his works on paper for the first time at 60SIX. He creates his cut-outs by beginning with detailed drawings based on “old master” paintings interspersed with references from modern culture (film, advertising, almost anything you can think of); he then masterfully cuts out elaborate shapes and lines from the drawings, in the end flipping the piece over to show the reverse side...an abstract web of texture and shadow. Unrelated yet interconnected pictures made of empty space draw the viewer deeply into a sort of visual puzzle. The works are ultimately concerned with line, movement and surface tension. Whether there is any meaning in the hidden icons might be the point.

Maps of no future: The work of German artist Jürgen Trautwein, who divides his time between San Francisco and Berlin, offers another example of art that relies on spectators to bring content to it - from their own experience and knowledge - rather than excavate meaning from it.
Gallery 60Six presents Trautwein's recent works on paper along with very different ones by Brooklyn artist Sam Stabler. 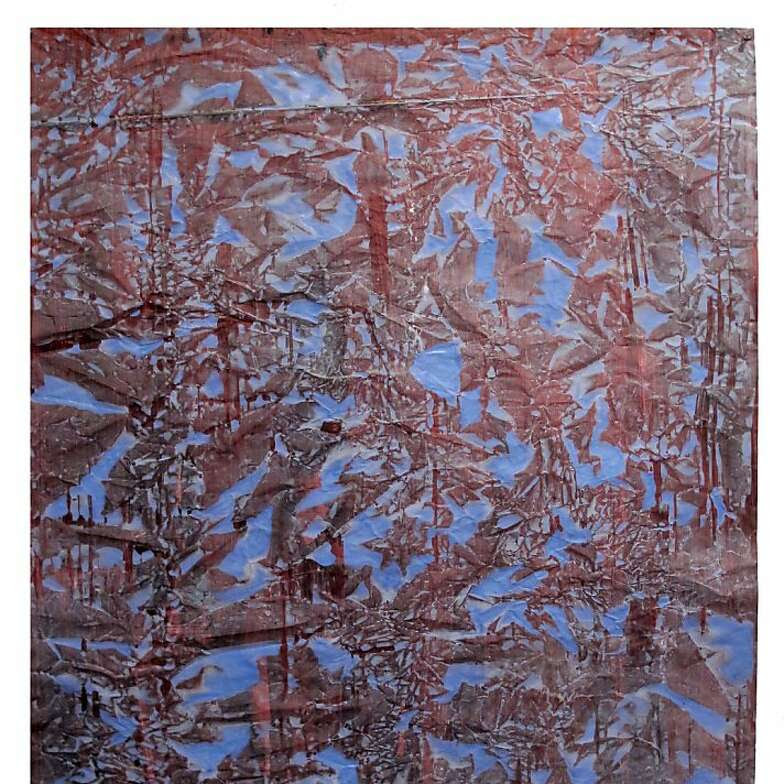 A Trautwein such as "Frozen Blue" hints at his process. It involves crumpling and flattening found paper - in many cases old airport blueprints - then coating and flooding the sheet with acrylic to produce a sort of relief-map-like skin.
Echoes abound of an earlier generation's more rugged exercises in color field abstraction. I think particularly of the turn-of-the-'70s unframed soaked paper abstractions of Manny Farber (1917-2008).
Yet Trautwein's works' illegibility as imagery does more than frustrate. It calls up the anxious uncertainty that attends our inability to read satellite imagery of the Earth.
Almost offhand, it seems, Trautwein aligns the inscrutability of certain scientific imaging with that of his paintings and with our incapacity to recognize in everyday life the signs of snowballing ecological calamity. Or rather, he relies on us to do that. And once the possibility comes to mind, resisting it feels like denial.

Posted by jtwine at 6:05 PM No comments: