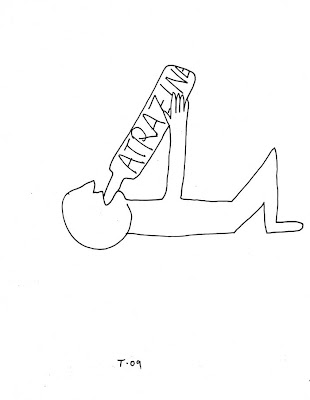 Atrazine, pen and ink on letter-size paper, 2009
"Atrazine, 2-chloro-4-(ethylamine)-6-(isopropylamine)-s-triazine, an organic compound consisting of an s-triazine-ring is a widely used herbicide.Its use is controversial due to its effects on nontarget species, such as on amphibians, and because of widespread contamination of waterways and drinking water supplies. There are also thought to be implications for human birth defects, low birth weights and menstrual problems. Like many commercial products, it is sold under numerous trade names. Its use is banned in the European Union but is still one of the most widely used herbicides in the United States with 76 million pounds applied in 2003. " via wikipedia
Posted by jtwine at 8:28 AM