On an Inter-related Series of Line Drawings by Jurgen Trautwein - by Ronald F. Sauer

On an Inter-related Series of Line Drawings by Jurgen Trautwein:
“The Parade of the Zeros”

… the center can not hold,
the blood-dimmed tides are loosed,
and everywhere the ceremony of innocence
is drowned.
W. B Yeats


…everything from toy guns that spark
to flesh-colored Christs that glow in the dark;
it’s easy to see without looking too far
that not much is really sacred.

nspired by Werner Heldt --an artist from the twilight of the Weimar Republic-- and Heldt’s drawing Der Aufmarsch der Nullen (or “The Parade of the Zeros”), Jurgen Trautwein has created an inter-related series of narrative line drawings which is a veritable iconography of man’s dilemma in relation to the modern capitalist state, a state whose secular and seemingly limitless material success has only served to reduce and isolate his spiritual essence by the ongoing commodification of culture. The day is looming, like the sword of Damocles, when a computer chip may be inserted under our skin that objectifies and reduces us strictly on the basis of how much and what we consume. Trautwein’s own series of drawings --“Aufmarsch” could have been drawn from the pages Wilhelm Reich’s The Mass Psychology of Fascism. Trautwein’s drawings concern themselves with the fragmentation of both our humanity and individuality.
As an artist who himself came of age in the Berlin before the wall came down, these preoccupations with the complexity of the human heart are as totally natural to Trautwein as a duck alighting on the water of a pond. And thus in the drawings that concern the plight of the individual, Trautwein embraces the question with cartoon-like directness and with the vulnerability of a curious child, doing so despite the gravity of the matter at hand. Whereas someone like George Grosz (or many another German Expressionist) depicts the nightmare of the broken and afflicted post-war society from the outside-in, as it was manifest on-the-streets and in-your-face, Trautwein, as regards the individual, has internalized the dislocations of modern man, and we feel it now as a kind of childlike loneliness.
“Friendly Fascism” (to use the idiom of Bertram Gross) has come a long and subtle way to pacify and infantilize us all, and now we float in a vacuum of powerless consumer success, the way we did as children in swimming pools, sustained and encircled by those blow-up plastic lifesavers with the little duck in front akin to the horn of a horse’s saddle. But the vast majority are not on the privileged ocean-liner. We’re stuck in a little private pool that’s called ‘an apartment’, afloat on the infinite metaphysical blue of morphine and the endless television possibilities, infantilized and contentedly alone, without much real community: suburbanized,  almost meeting each other as equals in supermarkets, expensive stadiums, impersonal train stations and endless highways.
Trautwein’s deceptively simple drawings are psycho-philosophical reflections, not in a Hall of Mirrors à la Versailles where the rich and beautiful got to see themselves infinitely multiplied in their privileged self-importance, but instead in a Mirror of Hallways that go on and on, nowhere, like a giant and impersonal bureaucracy in a city of Kafka or di Chirico, flashlight-lit in the darkling gloom. You don’t expect to meet anyone there. And if you do, you don’t presume to introduce yourselves. On the one side we are driven inward like an only child, on the other we’re anonymous as in a crowd. Oh, look at all the lonely people!
One may object that these are merely generalizations. Yes, but this is precisely how fascism takes root, binding people together by way of their rootlessness…

rom a purely aesthetic point of view, these black and white line drawings hover in the void between the comic and the tragic. Their very simplicity is beguiling. The roundness of the forms at first sight —this cult of the zero—begins like a baby, all round and soft. Their rotundity augurs well. The lines themselves don’t judge but are sympathetic. They indicate the vulnerability of modern mass man, the white trash that mass man is reduced to, blatantly objectified when not millionaires, famous or successful… (as if any of that could save us). But zeros themselves have ambitions all their own, still unbeknownst between themselves, for even unconsciously they would cohere.      In the early eleventh century the Italian mathematician Fibonacci introduced the Arabic decimal ‘zero’ into European accounting, and the Western World has never  been the same since. You can’t imagine higher math or even algebra with Roman Numerals. The zero itself is likely from Hindu India, that prototypical master of disengaged multiplicities. ‘Zeros’ have an antique pedigree all their own, hence unforgiving when overlooked.
And so the zeros in Trautwein’s series assume many forms, bonding and recombining in multifarious ways: laterally, vertically, crablike, in pairs of two, in pairs of two while drinking beers, in drinking beers while holding flags. In one drawing, two men make do embracing one another --though with only two arms between them! Sometimes the ‘zeros’ eyes are beady and small like a stupid little bureaucrat, sometimes porcine, like a hungry pig. They’re T.V. pundits, pseudo-newsmen gripping a microphone, faceless without ears or eyes, and in the corner a surveillance camera points at them as well. The ‘pundits’ are well paid for they work for the invisible Man… This pundit has a head like a balloon and is happy to hold a balloon of himself, as if his leisure itself was that of an innocent child. And not far behind, there’s the preaching and censorious patriarchal Leader, beating the mob down with convictions to spare. And there are the little faceless, earless folk drinking from their steins of beer, tender and sheepy in their stupidity, drunk with their convenient simplicity, finally eager to cooperate, the dogs all well-trained at last and dependable… And in another drawing, the quiet in the crowd’s ‘zero mouths’ now becomes a harangue in the mouth of the Point Man who grinds and spews in the name of the bosses. This angry balloon raises its voice. Gone is the kindly poor blind balloon-seller of an earlier generation, seen in Fritz Lang’s “M” of 1930 or in Carol Reed’s “The Third Man” of 1949, itself a post-modern warning of Byzantine Real Politik.
Yes, they’re all clearly numbered and accounted for, with their Hitlerian bar-code haircuts, just like a police line-up. Formerly, all were seated at their desks in school, all saying “present” when the teacher called the roll, even if they weren’t all there to begin with. (And where is “there”? And why should it be so?)
These drawings are the visualization of Heidegger’s Geworfenheit (“thrown into being”) that landed in Max Weber’s stahlhartes Gehäuse (“iron cage”) and, in the face of capitalism’s numbing success, this is where we still remain stuck. Or, as in the words of The Doors “Into this world we’re thrown, like a dog without a bone, like an actor out on loan/ Riders on the storm...” 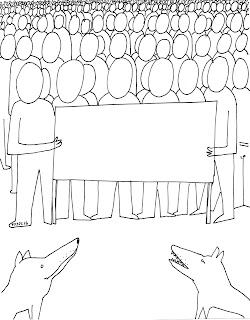 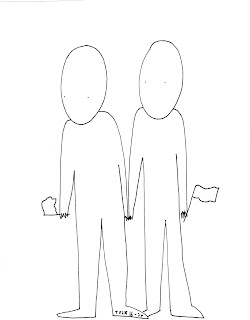 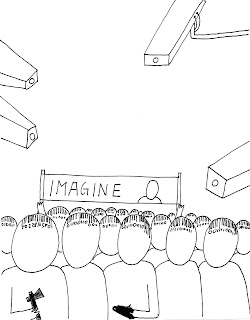 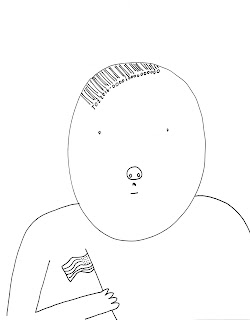 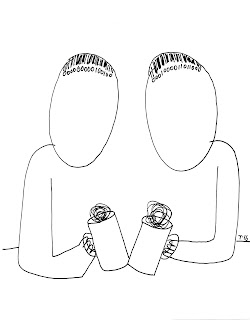 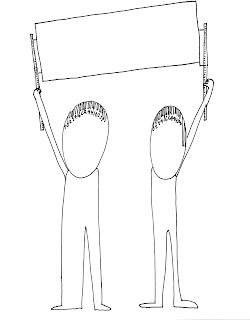 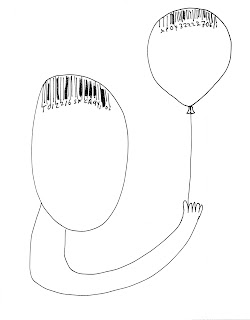 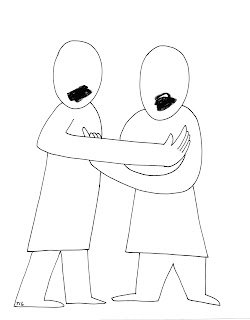 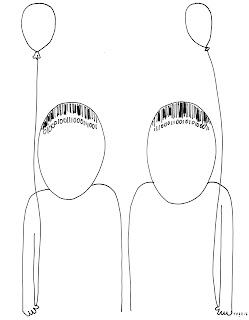 All drawings in pen and ink on letter-size paper, 2016